In a research report released Thursday, Cowen analyst Ritu Baral reiterated an Outperform rating on shares of ACADIA Pharmaceuticals Inc. (NASDAQ:ACAD) with a price target of $50, after hosting a group investor meeting with the management at company headquarters.

Baral noted, “ACAD management indicated the progress on the PDP NDA quality assurance protocols was going largely as planned, and they were very pleased with the progress on outstanding items, which we believe are all items related to NDA-associated inspections. Contract manufacturing plants remain GMP certified, with all having passed inspections within the past 2 years. The last item before formal NDA filing will be a successful full series of mock inspections. ACAD declined to tighten guidance on filing any further, reserving the right to what we believe is considerable buffer on the timing of the filing.”

Furthermore, “ACAD management indicated the screen failure rate of the ongoing Ph2 trial of pimavanserin trial in Alzheimer’s Psychosis (ADP) has been slightly higher than expected, but that they have no intention of relaxing the stringent entry criteria of the trial.”

All the 8 analysts polled by TipRanks rate Acadia stock a Buy. With a return potential of 14%, the stock’s consensus target price stands at $43.25. 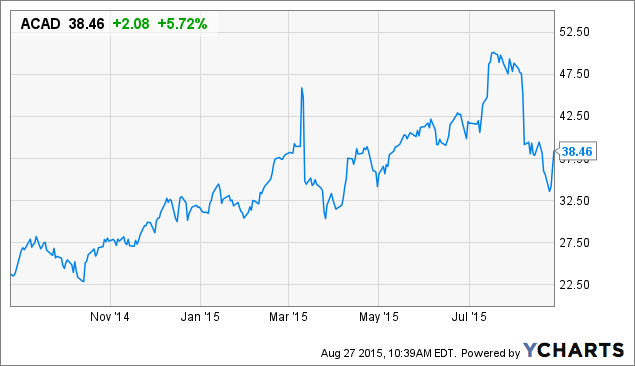