In a research report published Friday, Cowen analyst Phil Nadeau reiterated an Outperform rating on shares of Acorda Therapeutics Inc (NASDAQ:ACOR), while reducing the price target to $60 (from $65), after the company announced that it would discontinue development of its Plumiaz epilepsy drug as data from ongoing clinical trials didn’t produce the data necessary to refile the new drug application with the FDA.

Nadeau commented, “With Plumiaz’s end market small, and its regulatory prospects uncertain following the 2014 CRL, we think most investors had low expectations for the program […] We have removed Plumiaz estimates from our model. We had projected sales of $30MM in 2018, growing to $55MM at peak. As this is a relatively small percentage of projected Acorda revenue ($1.1B in 2020), the impact to Acorda’s earnings and DCF value is relatively modest. Our 2020 non-GAAP EPS estimate has decreased from $5.90 to $5.30, and our DCF-based price target from $65 to $60.”

Out of the 9 analysts polled by TipRanks, 5 rate Acorda stock a Buy, 3 rate the stock a Hold and 1 recommends a Sell. With a return potential of 69%, the stock’s consensus target price stands at $43.13. 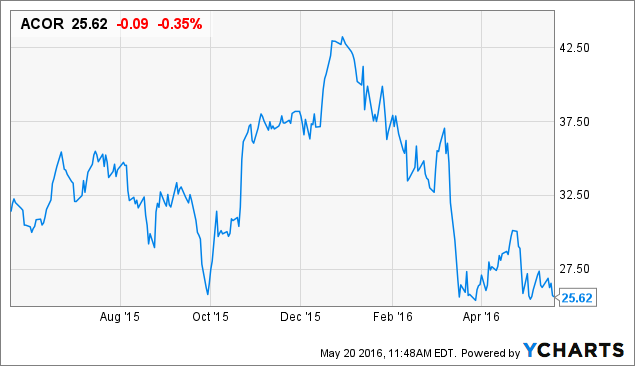