Cowen & Co. analyst Boris Peaker came out with some commentary on Idera Pharmaceuticals Inc (NASDAQ:IDRA), following the company’s new-found research alliance with MD Anderson to test IMO-2125 + Yervoy in a phase I/2 study in metastatic melanoma. The analyst maintained an Outperform rating on the stock, without suggesting a price target. Shares of IDRA are currently trading at $3.47, up $0.02, or 0.58%.

Peaker noted, “Idera’s lead asset, IMO-8400, is an antagonist of TLR7, 8 and 9, and over the next 12 months will produce the initial data from two Phase I/II trials in patients carrying a specific mutation in two genetically-defined lymphoma indications: in Waldenström’s Macroglobulinemia (WM), and in the ABC subtype of Diffuse Large B-Cell Lymphoma (DLBCL). Positive data in either one (or both) of these trials would validate the company’s new strategy and re-focus of its R&D efforts, and result in significant appreciation in IDRA shares.

Further, “We are projecting that if successfully developed, IMO-8400 could be launched in the US in Waldenström’s Macroglobulinemia, and in ABC-DLBCL in 2019, and that it could reach US/EU sales of $750M in 2023 in both indications, with peak sales of $1.1B in 2031. Based on our sum-of-the-parts NPV analysis, we consider IDRA shares undervalued and see the potential for 40-50% appreciation from current levels in the next 12-15 months.” 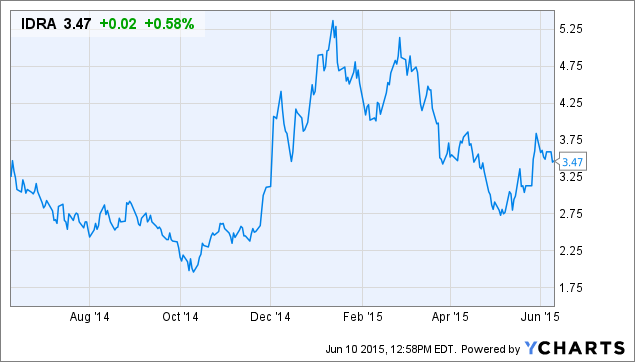