In a research report issued today, Cowen analyst Boris Peaker reiterated an Outperform rating on Celldex Therapeutics, Inc. (NASDAQ:CLDX) and raised the price target from $26 to $33, which represents a potential upside of 14 percent from where the stock is currently trading.

Peaker noted, “We believe that rindo’s recent breakthrough designation highlighted CLDX’s entire pipeline to investors, including the immune oncology drugs. At our recent investor conference Celldex showcased its immunotherapy pipeline, and most of these assets were not previously in our valuation. We are updating our valuation to include these drugs, which raises our price target.”

Beaker’s thesis stems from his is optimism about the two therapies CLDX has in late-stage development; a “leading immunotherapy drug aimed at a novel target and partnered with BMS;” and excitement surrounding the company’s early stage pipeline. He concluded, “We believe that it is rare for an emerging biotech to bring drugs to market without giving a significant fraction away to a partner during the development phase, which makes Celldex quite unique.” 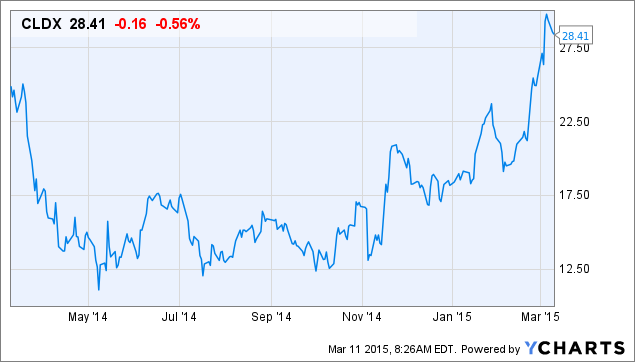