Cirrus Logic: We See Potential Growth But Remain On The Sidelines, Says Feltl

The analyst added, “We believe ASP headwinds could limitthe potential positive iPhone 6 unit impact to leading AAPL supplier CRUS. In recent months shares have increased, in our opinion, on speculation that the iPhone 6 launch would be a catalyst for higher valuations. We believe overall iPhone 6 impact will likely be muted given CRUS reaffirming “flattish” revenue growth in FY15. We see potential growth opportunities over the longer-term in audio/voice, butremain on the sidelines as we believe fundamentals suggest limited upside from current levels”.

According to TipRanks.com, which measures analysts and bloggers success rate based on how their calls perform, analyst Jeffrey Schreiner currently has a one-year average return of 7% and an 63% success rate. Schreiner has a -5.2% average return when recommending CRUS, and is ranked #827 out of 3213 analysts. 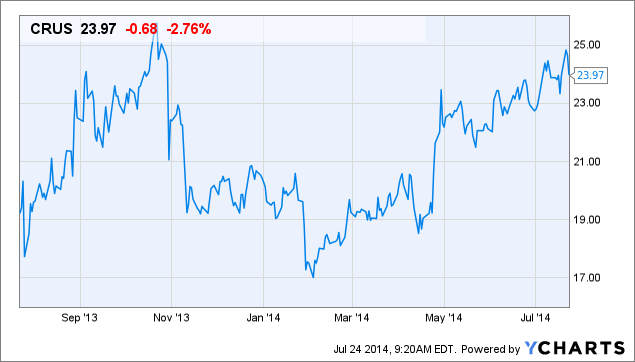