Baldry commented: “With solid profitability sustained since 2009’s economic downturn, CIMT announced a dividend policy to distribute at least 50% of net income annually beginning in 2015. Representing a roughly 4% dividend yield, and given shares are down approximately 40% from recent highs, we believe shares remain attractively valued.”

The analyst added, “As we view 2H13 and 1H14 results as good, we see the roughly 40% pullback from recent highs as overdone. Our 2014 forecast calls for record revenues and EPS which, in addition to the new dividend policy, appear solid catalysts for shares to return to former highs, in our view. Our $10.00 price target applies a 15x multiple to our 2015 $0.58 pro forma EPS forecast and adds a cash reserve estimate. Risk factors to achieving our price target include manufacturing sector dependence and economic-driven volatility, acquisition integration risks, and sentiment volatility related to 3D printing.”

According to TipRanks.com, which measures analysts’ and bloggers’ success rate based on how their calls perform, analyst Richard Baldry has a total average return of 9.6% and a 61.5% success rate. Baldry is ranked #1095 out of 3228 analysts. 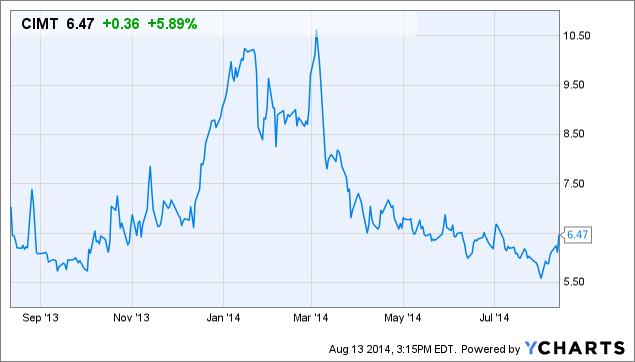