Netis wrote, “Given a healthy road map for growth with key North American customers, international expansion, and a metro opportunity dashing in, Ciena looks well positioned for double-digit growth in fiscal 2014 and 2015. With the tough third quarter out of the way (despite continued capital-expenditure worries and M&A chatter) and the fourth-quarter outlook reset (based largely on the transitory issues), we believe the story is only getting better. Based on a relatively intact earnings profile and attractive valuation, we remain aggressive buyers of the stock.”

Netis added, “The fourth-quarter outlook disappointed, however, with revenue cut by $35 million at the midpoint (causing a sharp decline in EPS) and gross margins lowered to 40% at the midpoint. Management chalked it up to two key issues: 1) a strategic AT&T Domain 2.0 win, which embeds up-front commercial concessions on revenue and margins, and 2) revenue recognition from several large international projects (footprint wins, which carry lower margins). The impact from these two initiatives—which we view as transitory and will largely take place during the fourth quarter—is responsible for the 400-basis-point sequential decline in gross margin outlook (each carries roughly equal weight). Notwithstanding, gross margins, according to management, are expected to return to the low-40s range in the first half 2015, driving operating leverage beyond the current target range of the low end of 7%-10%. Operating leverage is a vital piece of the investment puzzle at Ciena, and we strongly believe it cannot go unnoticed. The rest of that puzzle is reinforced by improving fundamentals from 100G and converged packet-optical network buildouts, of which we continue to see ample evidence.” 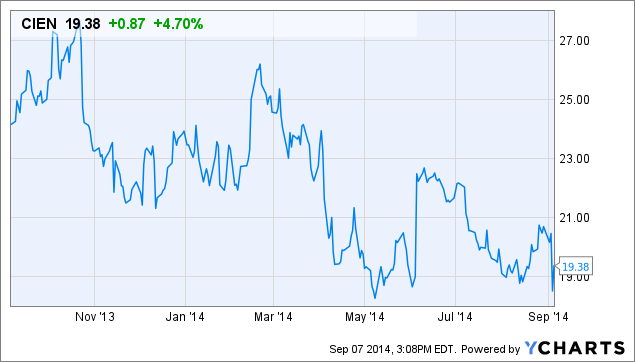 2 Consumer Stocks to Buy Before the Holiday Shopping Season