In a research note published Tuesday, Chardan analyst Keay Nakae reiterated a Buy rating on shares of Aralez Pharmaceuticals Inc (NASDAQ:ARLZ) with a price target of $10, after the company announced that it will acquire the U.S. marketing rights for the beta blocker drug Toprol XL from AstraZeneca, which is indicated for the treatment of hypertension.

Nakae noted, “Toprol XL had peak WW sales of $1.7 B, but has faced generic competition since 2006. AZ’s sales in the U.S. (of both the Branded and authorized generic) were $91 MM in 2014, $89 MM in 2015, indicating a leveling out. Sales of $53 MM for the first half of 2016 benefited from a new contract with the VA. Hence, the company is paying about 2x revenue, which we believe will prove to be more than reasonable, should the revenue runway be sustainable at around the current level.”

“We believe that this product is a nice strategic fit with the company’s 110 person direct sales force in the U.S., and its primary call point, high prescribing cardiologists and primary care physicians. In 2017, the U.S. product portfolio will now consist of 4 products, Fibricor, YOSPRALA, ZONTIVITY, which was acquired last month from Merck, and now Toprol XL,” the analyst added.

As usual, we recommend taking analyst notes with a grain of salt. According to TipRanks.com, which measures analysts’ and bloggers’ success rate based on how their calls perform, analyst Keay Nakae has a yearly average return of -20.7% and a 31% success rate. Nakae has a 1.5% average return when recommending ARLZ, and is ranked #4018 out of 4184 analysts.

As of this writing, the 3 analysts polled by TipRanks rate Aralez Pharmaceuticals stock a Buy. With a return potential of 119%, the stock’s consensus target price stands at $11. 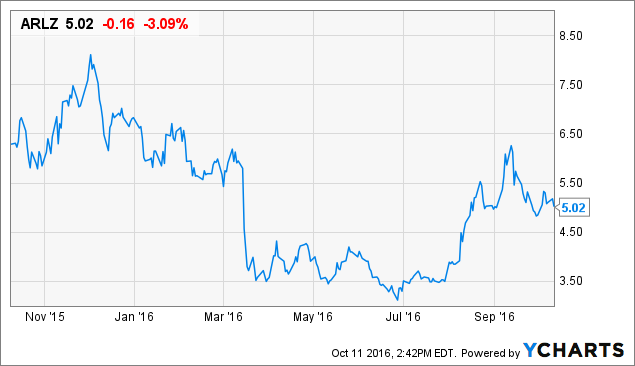