In a research note published after market close today, Chardan Capital analyst Gbola Amusa maintained a Neutral rating on OHR Pharmaceutical Inc (NASDAQ:OHRP) and reduced the price target to $3 (from $8), which implies an upside of 9.5% from current levels. The decreased price target comes after the company released headline data from the final OHR-102 IMPACT phase II data in wet AMD, which failed to show statistical significance on any key efficacy endpoint.

Amusa noted, “We wish to rule out that OHR-102 was benefiting patients in the first half of the study and having no effect or harming patients in the second half and therefore remove OHR-102 from our ophthalmology model until further clarity on OHR-102’s profile emerges, perhaps with data presented at ARVO (3-7 May, Denver) or with other phase II datasets which were previously guided for release in 1H2015.”

Furthermore, “We had previously modeled OHR-102, as a lower-cost add-on option, being used disproportionately in Avastin-treated patients in the wet AMD patient pool. With OHR-102 to us an asset still in need of validation, we transfer the potential volume shares for the product to Ophthotech’s Fovista, leading to an increase in our Fovista estimates to $3.6 billion in 2022E, from $3.0 billion previously.” 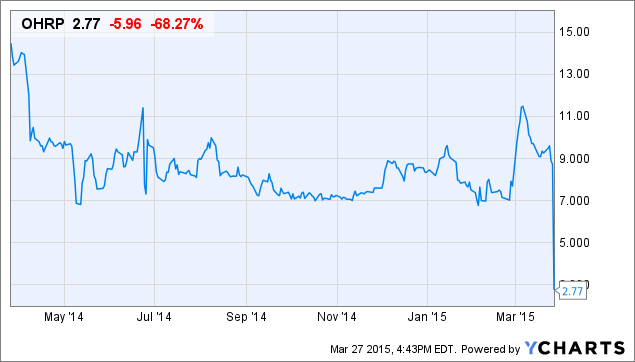