In a research report released yesterday, Brean Capital analyst Jonathan Aschoff reiterated a Buy rating on shares of Celldex Therapeutics, Inc. (NASDAQ:CLDX), and reduced the price target to $31 (from $34), which represents a potential upside of 83% from where the stock is currently trading. The decreased price target comes after the company disclosed that it has received enough feedback to conclude that it will not file Rintega for Accelerated Approval in recurrent GBM, and instead await conclusive results from ACT IV in primary GBM.

Aschoff wrote, “Small Phase 2 sample size was the greatest concern of the FDA. ACT IV has fully enrolled 745 patients, passed its first interim analysis (triggered by 50% of events), and the second interim analysis (triggered by 75% of events) is expected in late 2015 or early 2016. Final data should become available by YE16. For success, the second interim requires p=<0.018 (about a 0.65 HR) and final requires p=<0.044 (about a 0.79 HR). The rest of Celldex’s pipeline is progressing as expected. Celldex ended 2Q15 with a healthy $334 million in cash and investments, which could support operations through 2017 given the newly disclosed requirement of a full approval for Rintega based on Phase 3 ACT IV data, rather than Accelerated Approval. We are lowering our target price based on projecting Rintega’s launch in 2018, versus 2017.”

All the 7 analysts polled by TipRanks rate Celldex Therapeutics stock a Buy. With a return potential of 117.3%, the stock’s consensus target price stands at $36.86. 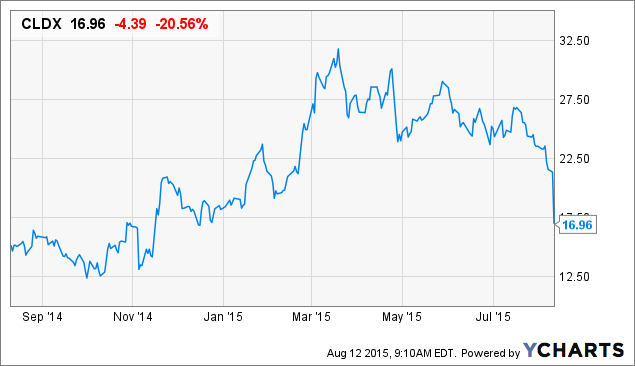