Brean Capital analyst Jonathan Aschoff came out with a few insights on Celldex Therapeutics (NASDAQ:CLDX) following the company’s first-quarter financial results and update on its pipeline. The company reported 1Q:15 EPS of ($0.33) on revenue of $0.5 million, on target with forecast.

Aschoff noted, “We have adjusted our 2015 forecast slightly, and our new CY:15 EPS forecast is ($1.43) vs. ($1.42).” Furthermore, “We think that there could be an opportunity to accelerate commercialization through an NDA filing for the indication of relapsed Avastin-naive patients, and we expect to learn news of this possibility by mid-year.” In closing, “We like shares of Celldex because of the depth and breadth of the pipeline, both near commercialization and in clinical trials.”

The analyst reiterated a Buy rating on CLDX, with a price target of $35, which implies an upside of 43% from current levels. 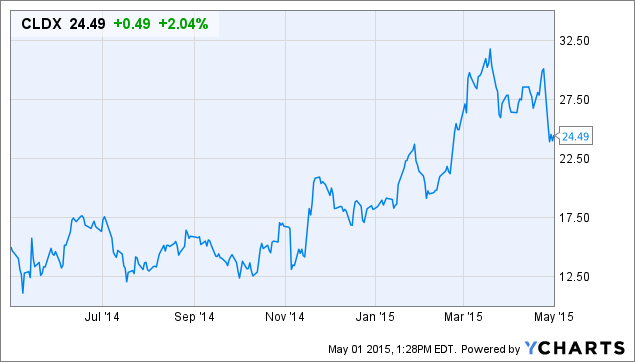