Pantginis noted, “We see the selection of Cytori’s ADRC’s for the CCTRN’s trial as validating for the company. The CCTRN is supported by the National Heart, Lung, and Blood Institute (NHLBI), a division of the National Institutes of Health (NIH). The randomized, Phase I trial in end-stage ischemic heart disease will include a ~10 patient open-label phase followed by a safety committee review, and then a ~24 patient randomized phase. Also validating for the company was BARDA’s recent notice of intent to exercise Option 1 of its contract with Cytori, which could be worth up to $35 million in non-dilutive funding to CYTX. Focus remains on the ATHENA Phase II program in chronic heart failure. ATHENA-I has 26 patients enrolled (target 45 by year end) and ATHENA-II has 3 patients enrolled. The study is enrolling 2-4 patients per month and the FDA has allowed expanding the number of clinical trial sites from 8 to 10 in ATHENAI and 10 to 12 in ATHENA-II. ATHENA-I data could read out in the mid-2015 time frame and management is encouraged by current enrollment trends”. 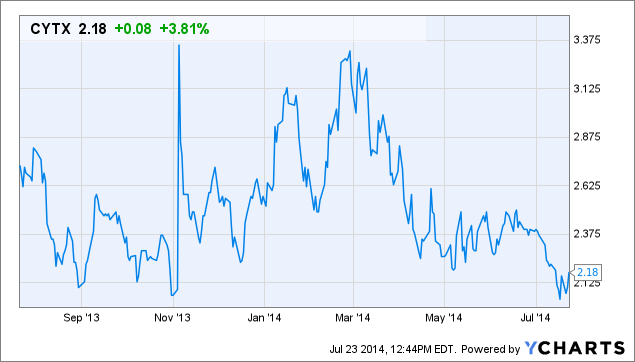