Catalyst Pharmaceutical (CPRX) announced Monday that the last patient has completed the blinded portion of the ongoing pivotal phase 3 study of Firdapse (amifampridine phosphate) for the symptomatic treatment of Lambert-Eaton myasthenic syndrome (LEMS). Top line data is on track to be reported later this quarter (3Q14).

In a reaction, Roth Capital analyst Scott Henry today maintained a Buy rating on CPRX with a $3.50 price target.

The analyst noted, “Two positive signs emerged from the company update including 1) more patients enrolled (38 versus 36), and 2) all patients elected to continue in the open label component of the trial (suggesting good tolerance of the drug). He added, “All patients elected to continue Firdapse treatment in the 2-year open label part of the trial. In our opinion, this high hit rate (100%) indicates tolerance of the therapy and possibly efficacy (as patients would likely not continue on a non-beneficial drug).”.

Henry concluded, “The clinical data should be considered a binary risk, but we are encouraged by higher patient #’s and strong patient participation in the open label trial”.

According to TipRanks.com, which measures analysts’ and bloggers’ success rate based on how their calls perform, analyst Scott Henry has a total average return of 22.2% and a 38.7% success rate. Henry is ranked #245 out of 3228 analysts. 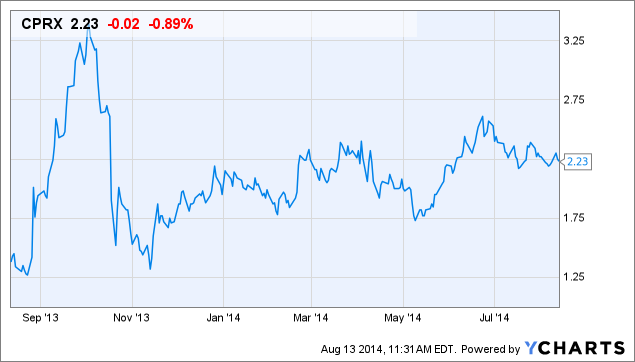