In a research report issued Friday, Cantor Fitzgerald analyst Mara Goldstein reiterated a Buy rating on Celgene Corporation (NASDAQ:CELG) with a price target of $145, following the company’s second-quarter results, posting adjusted diluted EPS of $1.07, above Goldstein’s estimate of $1.06. Total revenues were $2.08 billion, ahead of Goldstein’s estimate of $2.06 billion.

Goldstein stated, “We think this quarter was strong and management’s tone was bullish, though the shares were weak on earnings, with significant volume trading. Some of this could be attributable to weakness in the group, while a near term REVLIMID patent hearing in Europe (May 7th) could also be a factor in the weakness. We are not expecting this hearing to be a read-through to the ongoing U.S. patent litigation, but cannot rule out the possibility that it clouds the very near term sentiment on the shares.”

Furthermore, “Celgene shares are trading at roughly 17x 2016E EPS, which may be a higher multiple versus other large-cap peers, but not, in our view, relative to growth. And that suggests to us that investors continue to focus on the shares as the strong fundamentals and dynamic pipeline drive growth near and long term.” 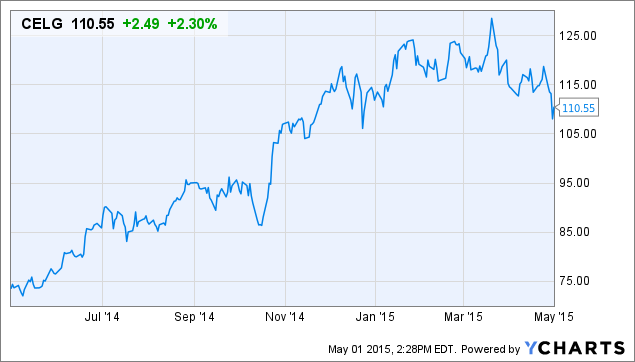