Cantor analyst Brian White weighed in today with his prediction on International Business Machines Corp. (NYSE:IBM), as the company will report second-quarter results after the market close on Monday, July 20, and host a conference call at 4:30 PM ET. White believes that IBM will struggle to meet his 2Q:15 revenue estimate of $20.65 billion given the sluggish spending environment and continued cloud transition, but meet his EPS projection of $3.81 (consensus estimate of $3.79).

White wrote, “We view 2015 as another transition year for IBM, and similar to the past few quarters, we expect the message of change through strategic imperatives to be voiced next week. IBM is not alone in this transition that is occurring across the IT landscape and has been characterized by many executives at leading tech companies as the biggest change in their careers. At the same time, IBM’s stock sports a 3.1% dividend yield and trades at a healthy discount (~36%) to the S&P 500 Index, while sell-side sentiment is currently the lowest in 20 years, and we are projecting a trough in the company’s sales cycle in 2Q:15.”

The analyst concluded, “Despite ongoing choppiness that we expect during this transition, we believe the stock holds characteristics that dovetail well with the mindset of value and contrarian investors alike.”

White rates International Business Machines Corp. stock a Buy with a price target of $198, which represents a potential upside of 17.5% from where the stock is currently trading. According to TipRanks.com, which measures analysts’ and bloggers’ success rate based on how their calls perform, analyst Brian White has a total average return of 17.0% and a 69.0% success rate. White has a 0.6% average return when recommending IBM, and is ranked #32 out of 3707 analysts.

Out of the 23 analysts polled by TipRanks, 5 rate IBM stock a Buy, 15 rate the stock a Hold and 3 recommend Sell. With a return potential of 0.6%, the stock’s consensus target price stands at $169.48. 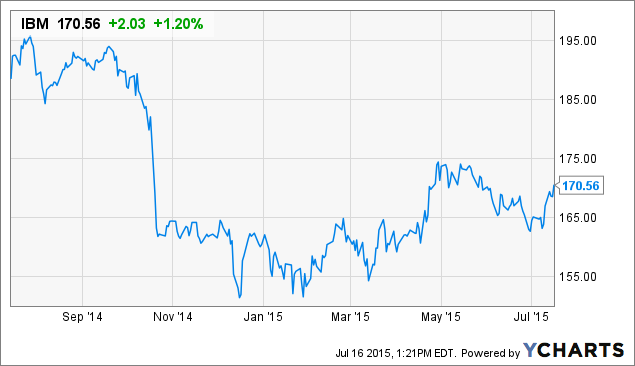