In a research report released this morning, Cantor analyst Daniel Brims reiterated a Buy rating on shares of Threshold Pharmaceuticals, Inc. (NASDAQ:THLD), with a $14 price target, after spending a day with the company’s management.

Brims observed, “Management is continuing to guide for both the Merck KGaA-run pancreatic trial and THLD-run Sarcoma trial to read out around YE:15, with top-line data potentially released simultaneously and full data being presented at scientific meetings. THLD has begun drafting the NDA, and we believe submission will occur by MID:16 assuming positive trial outcomes. We expect evo to receive priority review, with a potential approval and launch around YE:16.”

“We remain confident in the efficacy of evofosfamide (evo) and expect successful top-line data from the two phase 3 top-line readouts expected around YE:15, which we believe are the primary catalysts for THLD,” the analyst concluded.

All the 5 analysts polled by TipRanks rate Threshold stock a Buy. With a return potential of 237%, the stock’s consensus target price stands at $13.70. 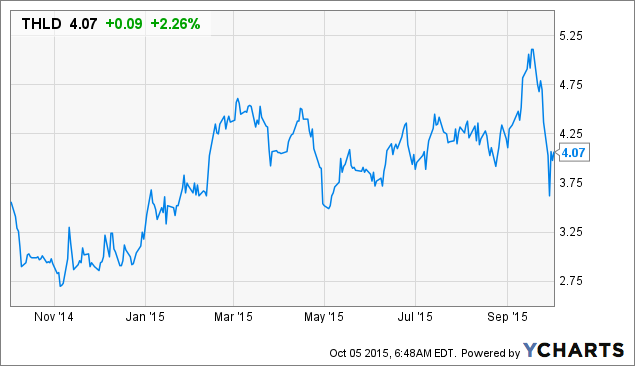