Shares of International Business Machines Corp. (NYSE:IBM) are trading down 5.16% to $164.29, after the company missed its second-quarter revenue expectations in a late Monday earnings report. However, Cantor analyst Brian White remains positive on the stock. The analyst reiterated a Buy rating on IBM with a price target of $198, which represents a potential upside of 20% from where the stock is currently trading.

In his report, White noted, “IBM delivered a healthy 2Q:15 performance relative to other quarterly reports over the past 12-18 months and the company reiterated its EPS outlook for 2015 but with a back-end bias. Although the stock was under selling pressure in after-hours trading last night, IBM has risen nearly 7% from the intra-day low of two weeks ago and has a history of falling after quarterly reports over the past 18 months.”

“Given skepticism around this turnaround and continued negative sentiment around IBM, the stock is trading at just 10.6x our CY:16 EPS estimate with an attractive 3% dividend yield and our model continues to suggest IBM’s sales cycle bottomed out in 2Q:15 (and operating profit cycle bottomed in 4Q:14). We are fine tuning our EPS projections and reiterating our BUY rating.”

Out of the 23 analysts polled by TipRanks, 5 rate International Business Machines stock a Buy, 15 rate the stock a Hold and 3 recommend Sell. With a return potential of 3.1%, the stock’s consensus target price stands at $169.48. 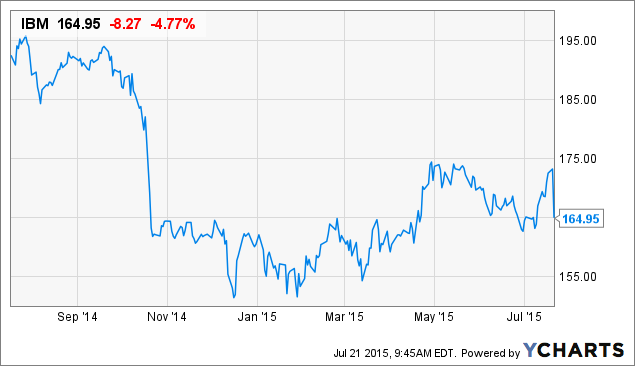