In a research report issued today, Cantor analyst Mara Goldstein maintained a Sell rating on Galena Biopharma Inc (NASDAQ:GALE) with a $2.00 price target, following the company’s fourth-quarter results, posting earnings of ($0.06) per share on revenues of $3.2 million, which were above Goldstein’s estimate of $2.0 million and FactSet consensus of $2.5 million.

Goldstein noted, “Commercial dynamics improved, but we still expect quarterly fluctuations. Prescriptions through the first eight weeks of 2015 (Symphony Health Solutions) show a decline of 27% from the first eight weeks of 4Q:14. Given 3Q:14’s inventory de-stocking and the phase-out of the voucher program that inflated prescriptions relative to dollars collected, we expect that quarterly numbers will bounce around. Despite the strong 4Q:14 number, we have little conviction on persistence of growth, and that drives our caution. We do, however, like the dynamic of increasing revenue per prescription, a function of improved mix of doses prescribed.”

Furthermore, “In spite of beginning signs of pipeline visibility our SELL rating on the shares comes from our concerns surrounding shareholder lawsuits/SEC investigation, patent challenge on ABSTRAL and lack of consistency from ABSTRAL sales, in the absence of meaningful clinical data from pipeline products, and the likely need for additional funding.” 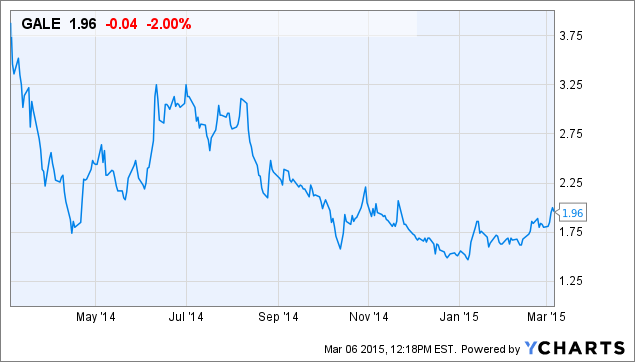