In a research report released today, Cantor Fitzgerald analyst Irina Rivkind maintained a Hold rating on Ligand Pharmaceuticals (LGND) and raised her price target to $49 (from $45), as her big picture view on Ligand has improved following the recent convertible debt offering.

Rivkind noted, “We are raising our PT since we assume that management would exercise the full buyback (~2.5M shares)”. The analyst continued, “We expect continued growth from Promacta, though we don’t believe that addition of indications like aplastic anemia or MDS will significantly move the needle. Management indicated that only $30-50M of sales could be attributed to the HCV indication but more growth is possible with Novartis’ hepatology sales force. We model peak sales of ~$600M, which are primarily predicated on global expansion and price increases. We expect consensus numbers to come down for Kyprolis after the failed FOCUS trial, but we are not lowering our numbers for now. Management indicated that Duavee remains a priority for Pfizer, but sales have been highly disappointing thus far. Future DTC remains a possibility. Over the next several years we expect the launches of several small products like CE-Melphalan and Carbella, which should make minor incremental additions to Ligand’s royalty streams.” 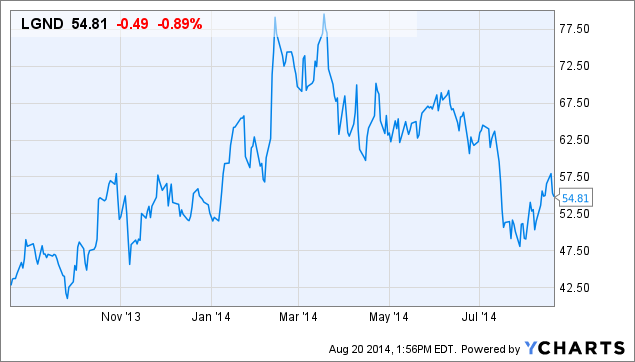