Cantor’s healthcare analyst Daniel Brims came out with a few insights on Threshold Pharmaceuticals, Inc. (NASDAQ:THLD), after the company hosted an Analyst and Investor Day on April 24 in New York. The analyst reiterated a Buy rating on the stock, with a $14 price target, which implies an upside of 237% from current levels.

The analyst believes that 2016 is shaping up to be a data rich year for Threshold. He explained, “We believe the key catalysts for THLD will be the readouts of the top-line OS data from two pivotal phase 3 trials, in pancreatic cancer and STS, which we expect in 1H:16, with FDA and EMA regulatory submissions to follow shortly thereafter. We believe proof-ofconcept phase 2 trials of TH-4000 in both NSCLC as well as head and neck cancers will initiate in Mid:15, and interim data will potentially be presented in 2016 at scientific conferences and allow us to begin assigning value to this asset.”

Furthermore, “Evofosfamide is also being developed by THLD in a registrational phase 2 in NSCLC as well as two investigator sponsored, and what we believe are potentially pivotal, phase 2 trials in multiple myeloma and glioblastoma, and while we do not expect final data during 2016 for any of these three trials, we do expect interim updates, which will be incremental.” 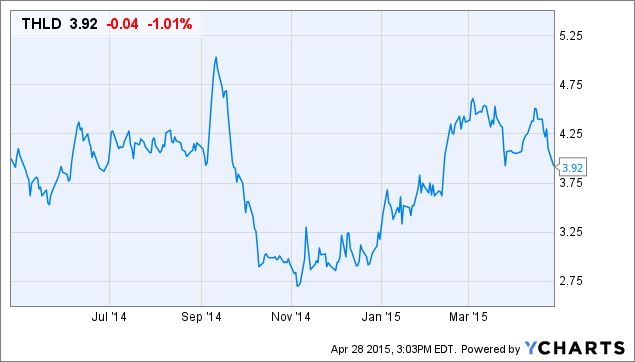