Threshold Pharmaceuticals, Inc. (NASDAQ:THLD) received another set of praises from analysts at Cantor in a research note released yesterday. The research team, led by analyst Daniel Brims, maintained a Buy rating on the stock with a price target of $14.00, following the company’s second-quarter financial results and update on its pipeline. The company reported a net loss of $(0.12), compared to Cantor’s estimate of $(0.15). THLD has ~ $83 million in cash and equivalents, which Brims believes will fund operations through 2016.

Brims wrote, “We believe read-out of top-line OS data in the two pivotal phase 3 trials of evofosfamide in pancreatic cancer and STS, which are expected around YE:15, will be the key catalysts for THLD. Evofosfamide is also being evaluated in a pivotal phase 2 trial for NSCLC and investigator sponsored trials in myeloma and GBM, and we believe data from these trials presented throughout 2016 will be incrementally positive, further validating the drug’s activity. We also believe proof-of-concept phase 2 trials of tarloxotinib in both NSCLC as well as head and neck cancers will initiate by YE:15, and interim data will potentially be presented in 2016 at scientific conferences and allow us to begin assigning value to this asset.”

All the 7 analysts polled by TipRanks rate Threshold Pharmaceuticals stock a Buy. With a return potential of 226.4%, the stock’s consensus target price stands at $14.10. 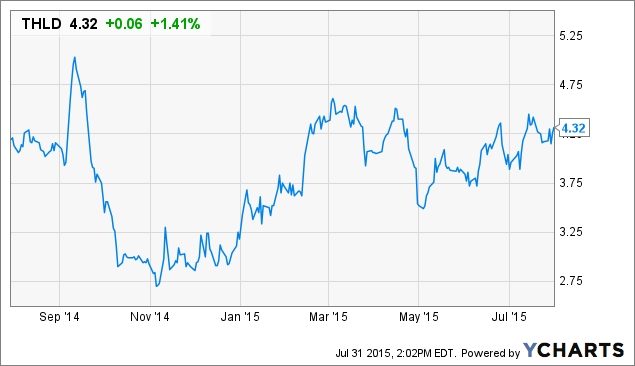