In a research report issued today, Cantor analyst Irina Rivkind Koffler maintained a Buy rating on Synergy Pharmaceuticals Inc (NASDAQ:SGYP) with an $8.50 price target, after the company reported its first-quarter results and outlined its ambitious clinical development strategy for its pipeline on Monday. With Synergy shares last trading at $3.45, Koffler’s price target implies potential upside of about 146% from where the stock is currently trading.

Koffler noted, “1Q:15 was generally in line with expectations and we still view Synergy as a potential takeout candidate following release of its Phase III constipation data in June: Synergy reported a net loss of $27.4M and loss per share of ($0.28), coming in a penny above the FactSet consensus loss per share estimate of ($0.27). We estimate that Synergy has $187.7M in cash and cash equivalents and 100 million shares outstanding as of May 8th.”

Furthermore, “We continue to view Synergy as a potential takeout candidate. Once Synergy releases its Phase III constipation data in ~June/July, we think the company will be at a more urgent inflection point, where management may need to engage potential partners or assess go-it-alone commercial scenarios.” 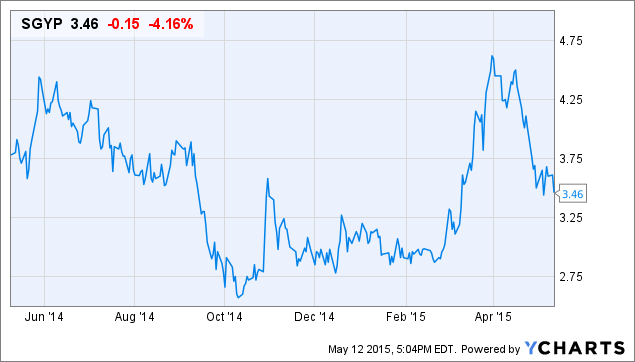