In a research report issued today, Cantor analyst Mara Goldstein reiterated a Buy rating on Celgene Corporation (NASDAQ:CELG) and raised her price target to $131 (from $120), which implies an upside of 12% from current levels.

Goldstein said, “Celgene, in our view, appears to have a strong tailwind heading into 2015 and beyond, based on the volume of data that support the core hematology franchise, Revlimid and Pomalyst, as well as the potential from partnered assets. At ASH thus far, compelling evidence for continued duration of treatment as well as combinations (novel, triplets, etc.) for multiple myeloma, with Revlimid serving as a backbone, is in evidence. This is not a new dynamic, but the totality of it speaks to continued growth for the already sizable multi- billion franchise, in particular due to opportunities in disease other than multiple.”

The analyst concluded, “We continue to like Celgene shares for the revenue and EPS growth opportunities, dynamic pipeline (e.g., GED-0301, multiple partnerships, post-ASH digestion, and additional indications from currently marketed products), share repurchase, and the overall directionality of EPS growth.” 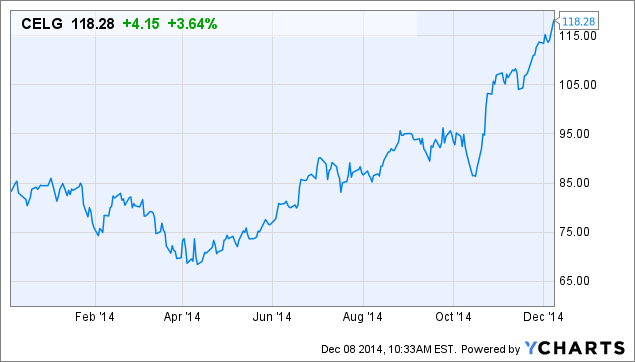