In a research report published Monday, Cantor analyst Irina Rivkind maintained a Buy rating on Valeant Pharmaceuticals Intl Inc (NYSE:VRX) and raised the price target to $214, following the news that the company will acquire gastrointestinal drugmaker Salix Pharmaceuticals, Ltd. (NASDAQ:SLXP) in an all-cash deal valued at about $10.1 billion. The company also released its fourth-quarter results with the announcement, posting net income of $534.1 million, or $1.56 per diluted share, compared to $125.0 million in the year-earlier period, or 36 cents per diluted share.

Koffler wrote, “We maintain our BUY rating and raise our PT from $184 to $214 to incorporate our Salix accretion assumptions along with our interest expense estimates and expect to refine our estimates further after tomorrow’s 8:00 am conference call. We would not expect Valeant to enter a bidding war for Salix if other more interested parties emerge through the process.”

Furthermore, “We believe that it is critical to maintain the current Salix gastroenterology commercial infrastructure to assure the success of this acquisition, which appears to be management’s intent. However, we also think that primary care reps will be needed in some capacity to promote Xifaxan in IBS-D in the future (so spending could rise later). The deal is expected to close in 2Q:15 and to be over 20% cash EPS accretive in 2016. In 2015 management expects modest accretion to account for over $500M in Salix inventory workdown. We were modeling only ~$610M in combined 2015 Salix operating costs so the cost synergy targets are meaningfully above our original estimates (and could be somewhat aggressive, in our view). We now arrive at slightly higher accretion levels (+6.6% in 2015, and +23.4% in 2016).” 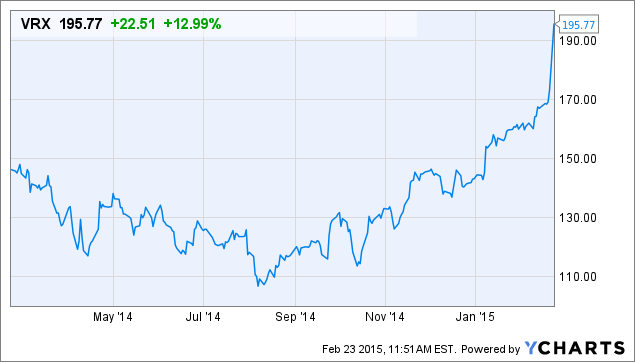