In a research report issued today, Cantor analyst Mara Goldstein maintained a Buy rating on Newlink Genetics (NASDAQ:NLNK) with a $48 price target, as the company has licensed its Ebola vaccine program to Merck (NYSE:MRK) for an up-front payment and tiered royalties.

Goldstein noted, “While we view this deal as adding long-term value, the shares have traded off today, which we think may represent the wash-out of short-term investors/Ebola investors. But with the added cash from the deal and the potential for long-term value, we think this deal adds $6 to our PT, hence we are raising our PT to $48.”

The analyst added, “The Merck deal accomplishes three things for NewLink. Firstly, it establishes credibility and viability for the program, allowing it to be incorporated as a potential long-term cash flow generator. Secondly, it allows NewLink to return its focus to its core immuno-oncology programs, which is of critical importance given the potential readout of IMPRESS (HyperAcute Pancreas) in the next few months and the new Roche relationship for IDO/TDO. Lastly, it adds another year of cash runway, in our view, to NewLink’s balance sheet (on top of the $150 million from the Roche deal).” 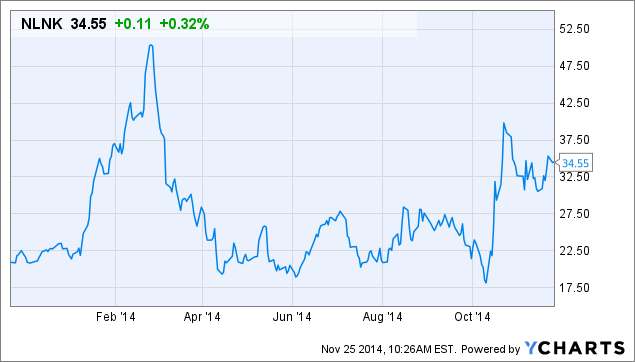