Cantor analyst Daniel Brims was out pounding the table on Endocyte, Inc. (NASDAQ:ECYT), reiterating an Outperform rating and a $21.00 price target, which represents a potential upside of 247% from where the stock is currently trading.

Brims stated, “Phase 1 dose escalation of the second-generation molecules, EC1456 and EC1169 are currently underway. We expect these trials to begin reading out in Mid:16 and define which indications will be pursued in registration studies. We believe dose escalation of EC1169 in prostate cancer is slightly behind EC1456, though management has stated patients enrolled to date have consistently expressed high levels of receptor, which we believe will speed enrollment and also potentially provide increased efficacy, by localizing higher levels of drug at the tumor.”

Furthermore, “The phase 2 TARGET trial for vintafolide in NSCLC met the primary PFS endpoint, with a HR=0.75. We believe the mature data, which we expect in Mid:15, will follow this same trend and show the tumors need to both be folate receptor positive and also express high levels of receptor. We believe, although these data demonstrate proof of concept for ECYT’s platform and will guide the design of future trials, the vintafolide program will be halted in favor of the second generation EC1456.” 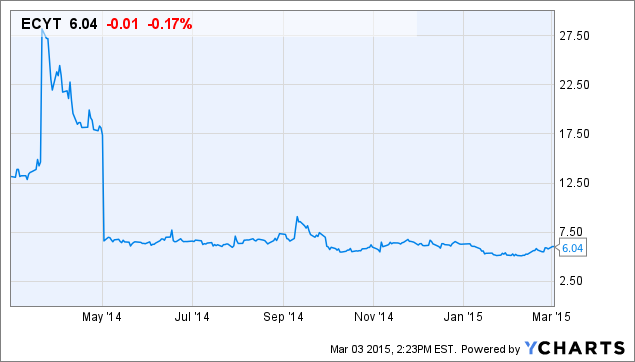