Cantor analyst Mara Goldstein weighed in today with her views on the acquisition of Receptos Inc (NASDAQ:RCPT) by Celgene Corporation (NASDAQ:CELG) that was announced yesterday after-market close. The analyst also maintained a Buy rating on CELG stock while slightly raising the price target to $146 (from $145), which represents a potential upside of 19% from where the stock is currently trading.

Goldstein wrote, “This deal comes with a purchase price of $7.2 billion, a 12% premium to Receptos’s current stock price, and 46% premium over the close price three months ago. However, the potential revenues from ozanimod in UC and MS are substantial, and if successful, hold the potential to eclipse this purchase price at peak and are additive to long-term growth. Ultimately, we think the most important aspect of this deal is the potential dilution of Revlimid, through increasing the breadth of the commercial offering, of which these candidates hold the promise.”

The analyst added, “Receptos brings two Phase III programs into the pipeline ozanimod for both ulcerative colitis (UC) and relapsing multiple sclerosis (MS), both indications with billion dollar potential, in our view. The clinical trial programs are expected to read out in 1H:17 (MS) and in 2018 (UC). Ozanimod for UC, combined with GED-0301, could create critical mass in the inflammatory bowel disease space, a dynamic we like.” 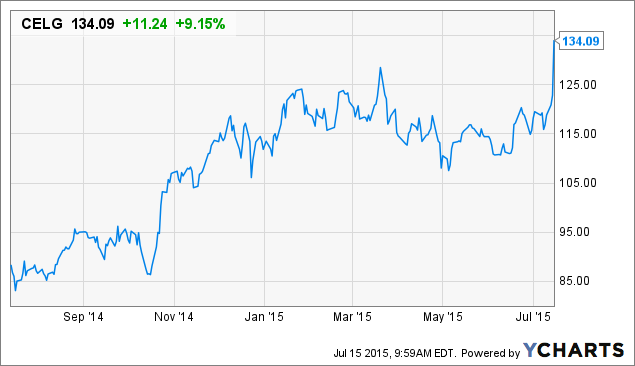