In a research report released Tuesday, analyst Irina Rivkind of Cantor assigned a Buy rating on Synergy Pharmaceuticals (NASDAQ:SGYP) with an $11 price target, following the presentation of results from a phase 2b dose-ranging study assessing plecanatide’s safety and efficacy in 424 adult patients with irritable bowel syndrome with constipation (IBS-C).

Koffler wrote, “We are at the American College of Gastroenterology (ACG) Annual Meeting, where we attended the podium presentation of the Phase IIb plecanatide trial in IBS-C and had the opportunity to catch-up with management. We continue to like the story and view Synergy as a likely takeout target over the next 12 months and base our valuation on that scenario. The SP-333 opioid-induced constipation data are expected by early November which could be a favorable catalyst.”

The analyst continued, “We liked plecanatide’s dose response data, which indicates that an optimal dose has been determined (with no additional efficacy benefits in the higher 9 mg dose). The 3 mg and 6 mg doses were selected for further development, which is consistent with the dosages selected for the chronic idiopathic constipation (CIC) indication. The company also disclosed its conservative statistical methodology for dealing with missing data, which we believe could be more stringent than earlier drug approvals. We think that this technique may reduce drug holidays associated with diarrhea, and make the drug’s efficacy and tolerability even more compelling to the FDA.” 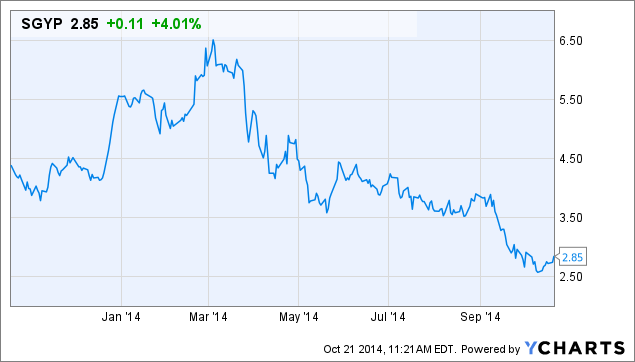