Cantor analyst Irina Rivkind maintained a Buy rating on Synergy Pharmaceuticals (NASDAQ:SGYP) but reduced her price target to $8 (from $11), which represents a potential upside of 134% from where the stock is currently trading.

Rivkind wrote, “Today Synergy announced the pricing of $175M in convertible senior notes, with a $25M over-allotment. The notes convert at $3.11/share and are already trading higher. We believe that the stock can appreciate further with the announcement of Synergy’s SP-333 opioid-induced constipation (OIC) data in November— especially with the removal of its financing overhang. For this reason, we include an additional 64.3M shares and utilize 173M shares in our total share count for the company when calculating a takeout valuation. This number includes approximately 13M shares in stock options (which we exclude from EPS calculations for now). We utilize takeout valuation for Synergy since we believe that management prefers to sell the company rather than commercializing plecanatide on its own.” 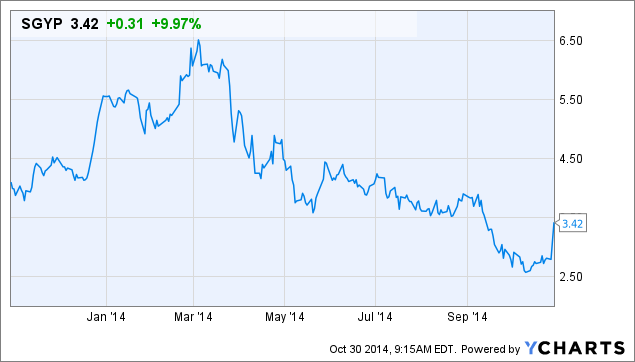