In a research report released Thursday, Cantor analyst Mara Goldstein maintained a Buy rating on Array BioPharma (NASDAQ:ARRY) with a $9 price target, as the company will regain worldwide rights to binimetinib, a MEK inhibitor in Phase III development for a variety of cancers, as of April 22, 2015.

Goldstein noted, “We think this deal offers great terms as it allows for continuity for binimetinib’s development, provides both cash and other support (clinical, regulatory, manufacturing, etc.) critical to uninterrupted development of binimetinib, and unburdens Array from paying accrued co-development costs. In addition, Array will gain access to a variety of Novartis compounds currently being tested or contemplated with binimetinib (LEE011, BYL719, etc.).”

The analyst added, “Array will gain substantial optionality, in our view. Array regains rights to a fully funded late-stage Phase III asset, with the option to keep, out-license, or co-market binimetinib. Additionally, the start of filanesib’s (multiple myeloma) Phase III FACTOR trial was recently delayed as the binimetinib deal was being worked out, and thus we expect it to begin at some point.” 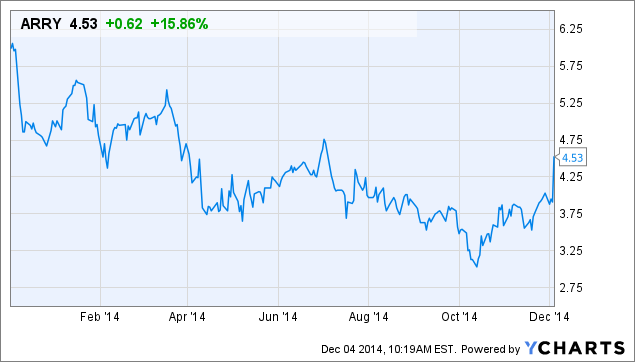