In a research report published this morning, Cantor analyst Mara Goldstein reiterated a Buy rating on Array Biopharma (NASDAQ:ARRY) with a $9.00 price target, as the company has entered into a co-development deal with Oncothyreon for ARRY-380, an oral HER2 inhibitor which was discovered by Array and licensed to Oncothyreon.

Goldstein said, “While the drug has shown early signs of promise, ARRY’s decision to exit the co-development deal is smart, in our view, as it allows the company to monetize the asset, preserve its own cash for development of other candidates, and participate in the economic life of ONT-380 should it be successful, without cash outlay.”

The analyst concluded, “We like Array for the potential of the pipeline amidst low expectations. Looking back a year, we think that Array is in a stronger position, having monetized ONT-380, regained binimetinib, improved cash, rationalized the pipeline, and implemented restructuring changes. Filanesib’s development (multiple myeloma), has been somewhat stalled by binimetinib’s return, but with the ASH meeting producing a positive reception for broader Kyprolis use, we are incrementally more constructive on the candidate.” 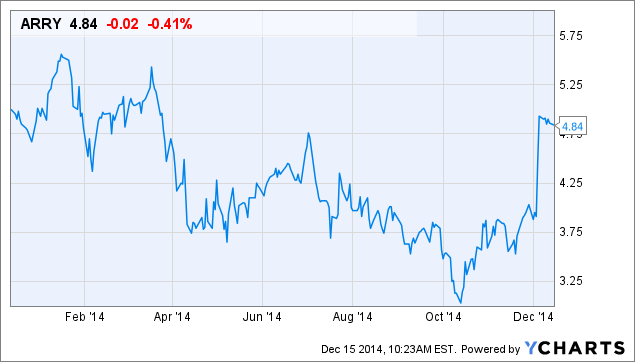