In a research report published yesterday, Cantor analyst Bryan Brokmeier initiated coverage on shares of TrovaGene Inc (NASDAQ:TROV) with a Buy rating and price target of $10, which implies an upside of 56% from current levels.

Brokmeier wrote, “TROV may penetrate an estimated 5% of the U.S. cancer market by 2020. In the near term, revenues should be relatively immaterial, but we believe that the differentiated approach to cancer detection and monitoring offered by TROV’s urine-based technology positions it to be a leading player in the cancer diagnostics market. We estimate that there are 16.0M people in the United States with cancer, 1.7M new cases each year, and almost 600K annual deaths. Assuming TROV successfully demonstrates validity and clinical utility of its assays, we estimate that the company may generate volume of 114,209 tests, or 5% of the total U.S. opportunity. Assuming a $1,000 reimbursement rate, we forecast 2020 U.S. product revenues of $114.2M, which is based on relatively conservative assumptions, in our view.”

The analyst concluded, “Shares of TROV are down over 50% since it hit a 52-week high on June 12, 2015, driven by the increasingly competitive environment, the June 2015 rebalancing of the Russell 2000, and the overall pullback of diagnostic stocks. We believe presentations at upcoming conferences from some of TROV’s 30 clinical studies could be positive catalysts for shares.”

All the 5 analysts polled by TipRanks rate TrovaGene Inc stock a Buy. With a return potential of 64.9%, the stock’s consensus target price stands at $10.60. 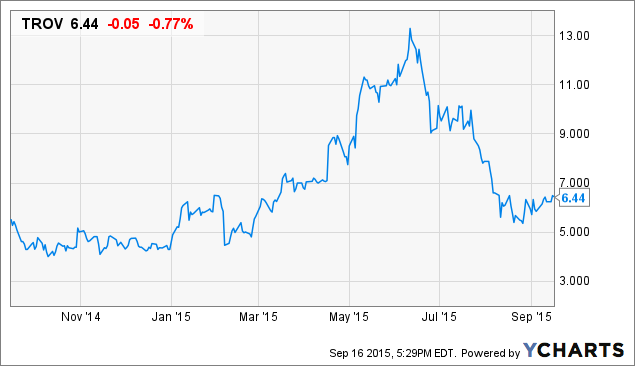