Squali wrote, “While the launch of Apple Pay with potentially ~800M iTunes store accounts raises the specter of major competition for PayPal, we view the announcement as more of a negative headline with limited impact on revenue growth over the near/medium term. This is due to a number of reasons including the scope of Apple Pay (point-of-sale and in-app purchases, limited to iPhone 6 and Apple Watch) and to iOS’s market share relative to Android’s both in the U.S. and worldwide. That said, Apple’s announcement and continued weakness in eBay’s core Marketplaces may increase pressure on management/board to consider alternatives, including a potential spin-off of PayPal sooner rather than later.”

Squali added, “With its payments solution, Apple is targeting the physical point-of-sale (POS) (currently at 220K participating store locations belonging to brands such as Macy’s, Subway, Walgreens, etc.) as well as in-app purchases (participants include Target, Groupon, and Uber). While this does present a headline risk to PayPal’s growth prospects in the form of increased competition (especially for its small Braintree division), we do not expect a meaningful impact on PayPal’s top line growth in the near/medium term, given that a) current Street estimates for PayPal and 2016 guidance do not include any contribution from POS, b) Apple Pay will be supported on iPhone 6 and Apple Watch only (representing a small subset of iOS users) and will only power in-app purchases at this point, and c) Android still accounts for the majority of the smartphone market share in the U.S. with 51.5% vs. 42.4% for iOS in July, according to comScore. We note that in 2013, eBay’s mobile TPV represented 15% of overall TPV and grew 250% Y/Y.” 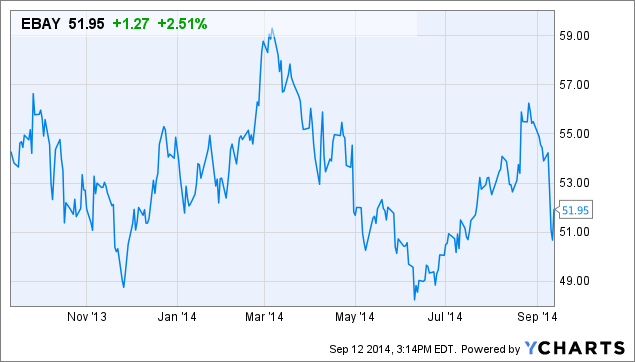