Khan wrote, “U.S. paid-click data (from comScore) shows click volume to Expedia.com sites (~50% of total revenues) up 4% Y/Y in July/Aug. While this represents a sharp slowdown vs. triple-digit growth in prior quarters (200% in 2Q, 150% in 1Q), we note that the Y/Y comp was 280%-point tougher for July/Aug vs 2Q:14, likely reflecting the hit from TripAdvisor meta-search switch last year, when Expedia likely ramped-up spending on paid search. Normalizing for the tough Y/Y comp, growth in Expedia.com’s paid- click appears to be consistent with trends in prior quarters. We view the elevated level of paid click activity (normalized) to be indicative of higher ad spending on Google’s paid search to capitalize on an improved traffic conversion/ROI.”

Khan added, “As of 2Q:14, ~59K hotels were offering ETP (vs. ~51K in 1Q:14 and ~45K in 4Q:13), and we expect Expedia to continue to roll it out to a broader set. Given the meaningful lift in room nights growth at participating hotels, we believe that further rollout of ETP will continue to positively impact EXPE’s room nights growth as well.” 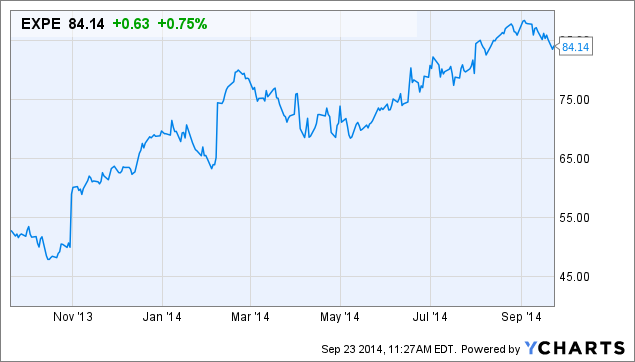 This Top Analyst Is Bullish on Facebook (FB) and Expedia (EXPE); Here’s Why

Expedia Inc Earnings: The Bulls Are Getting Nervous