Rivkind wrote, “We are also increasing growth in the generics business following recent management comments at an investor conference. Finally, we extend revenues for Opana ER to contemplate the potential for a generic settlement. Our estimates are now at the lower end of management’s revised guidance of $2.78-2.86B and $4.00-4.20. With our new $56 PT (up from $52), we still see 18% downside from the $68.25 closing price and note that ENDP could be more vulnerable if Auxilium discussions deteriorate. For these reasons, we reiterate our SELL rating, which is based on DCF analysis.”

Rivkind continued, “We see Xiaflex as a commercially challenging product, with a number of safety risks, reimbursement issues, and a REMS program that likely restricts use. We don’t think Endo would pursue a dermatology indication in cellulite, which would require significant promotional investment. With the exception of Stendra, the remainder of Auxilium’s portfolio is comprised of mature or declining products (so organic growth could be difficult, though there could be room to take price increases). Furthermore, we worry about commercial disruption in the existing business associated with sales force terminations, as well as subsequent “starved launches” of products like BEMA Buprenorphine, Aveed, Stendra, and Xiaflex label expansions. Longer- term we would expect the transaction to be somewhat disappointing, though it would still serve the purpose of creating additional EBITDA borrowing capacity for Endo to facilitate more M&A.” 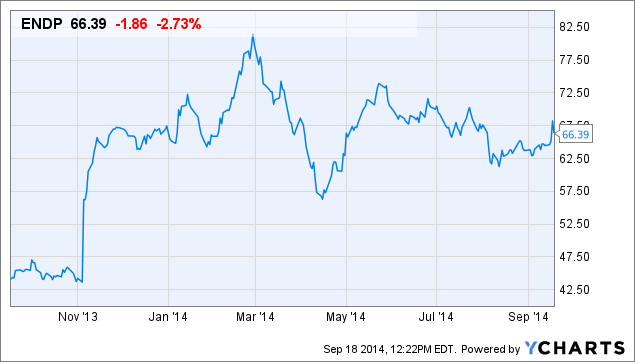