Rivkind wrote, “Jazz reported revenues of $291.2M and adjusted diluted EPS of $2.05, well ahead of FactSet consensus estimates of $273.8M and $1.92, respectively. Xyrem revenues were $191.4M relative to StreetAccount estimates of $182.6M, a strong rebound from weakness in the first quarter, lowering our concerns about logistical capabilities of the central pharmacy. Management raised 2014 revenue guidance to $1.125-1.165B from $1.1-1.16B, while maintaining full year EPS guidance of $8.00-8.25. This top-line guidance raise does not affect bottom-line guidance due to an expected increase in expenses as a result of the recent acquisition of rights to Defibrotide in the Americas from Sigma-Tau. We model $1.18B and $8.43. The analyst added, “We anticipate continued share volatility during the Xyrem FDA dispute and generic legal battle and subsequently a lower likelihood of takeout in the next 12 months”. 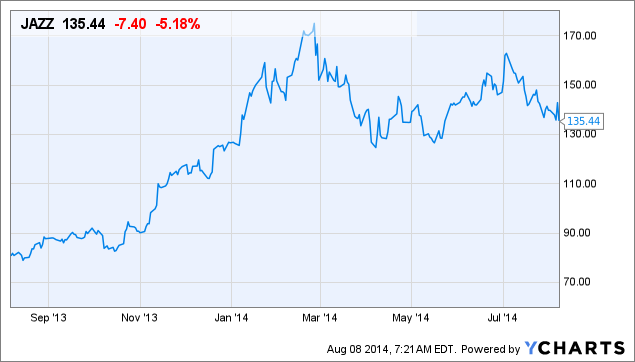