In a research note released yesterday, Cantor Fitzgerald analyst Irina Rivkind reiterated a Buy rating on Sucampo Pharmaceuticals (SCMP) with a $12 price target, following the company’s second quarter earnings results, which were in line with consensus.

Rivkind wrote, “Consensus EPS estimates were too high, in our view, and significantly above prior guidance”. The analyst continued, “We believe that sales this past quarter were boosted by increased patient awareness in the category (driven by competitor Ironwood’s DTC campaign), price increases, and some small benefit from promotion in opioid-induced constipation. Amitiza is now priced at $9.98/day relative to $8.43 for Linzess, and this continued pricing power should continue to drive sales growth of the brand. Going forward, we expect even more momentum as Sucampo partners with Takeda to target patients with constipation (rather than with pain) in a broad DTC campaign expected to start in 3Q:14. We note that Ironwood’s (IRWD) promotional effort has driven significant interest in its brand, and we would similarly expect another inflection point for Amitiza. Furthermore, it is possible that wholesalers may buy extra inventory ahead of this campaign, as seen with Ironwood, which could lead to unexpected revenue strength next quarter”. 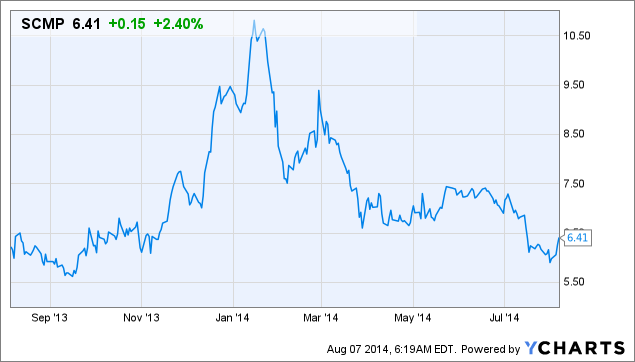 Cantor Raises Sucampo Price Target To $14, As Takeda Continues To Invest in Amitiza