Cantor Fitzgerald Maintains Buy On Google Ahead Of 3Q14 Results

In a research report published today Cantor Fitzgerald analyst Youssef Squali maintained a Buy rating on Google (NASDAQ:GOOGL) with a $650 price target, ahead of the company’s release of its third-quarter results.

Squali noted, “We expect Google to report strong 3Q:14 results on Thursday, 10/16, driven by continued strength in Search and Display, particularly in the U.S., with tailwinds from Enhanced Campaigns, PLAs, programmatic and video. Capital intensity and margin deterioration remain long-term concerns, however.”

The analyst continued, “SEO IgnitionOne’s 3Q:2014 Report stated that Y/ Y growth in U.S. Search ad spend increased 2.1% in 3Q:14 vs. +9% in 2Q:14 and +12.6% in 3Q:13. IgnitionOne believes the deceleration is due to a shift (within the company’s limited sample set) away from less efficient search partner networks (likely into Google sites), which caused aggregate spend on Google to be down 3.5% Y/Y. On Core search, however, spend on Google was actually up 27.5% Y/Y. This suggests that core Google site is again likely to outperform network growth this quarter. comScore’s latest data also show some deceleration, with Google’s share of U.S. explicit Core searches ticking down to 67.3% in August vs. 67.4% in July and the 2014 average of 67.5%.” 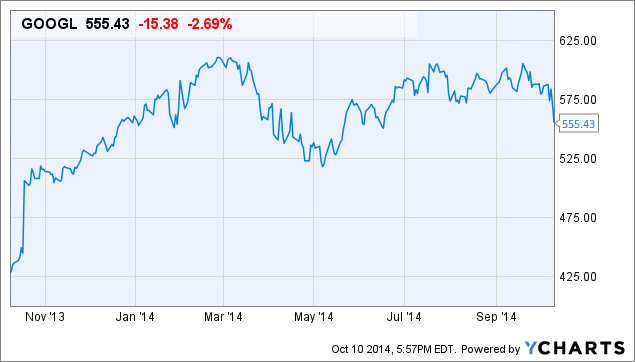