Rivkind wrote, “We were initially anticipating a summary judgment for the first lawsuit along with additional delays by Teva, which now seem to be playing out. This news does not change our launch timing estimates for Eagle’s liquid Bendamustine, and we reiterate our BUY rating and $30 PT, which are based on DCF analysis.” Rivkind continued, “Teva’s first lawsuit focused on a patent for solid forms of Bendamustine, and Eagle management believed this lawsuit was frivolous given its product’s liquid formulation. This lawsuit evoked a 30- month stay, ending in March 2016, which has been removed with the dismissal of the lawsuit. Teva’s subsequent lawsuit is associated with a more recently issued patent (7/29/14) that focuses on pharmaceutical formulations of lyophilized Bendamustine, but as a ‘later listed’ patent, should not burden Eagle with an additional 30-month stay. Therefore, we view the dismissal of the first lawsuit as directionally favorable for the company as it creates additional optionality for Eagle (or a potential partner) to launch its liquid version of Treanda upon expiration of Orphan Drug/pediatric exclusivity in September 2015 without a second launch barrier (Eagle’s Treanda formulation is tentatively FDA approved, pending resolution of patent litigation).”

Rivkind added,” We continue to believe that Eagle will launch its small, rapid dose (50 mL bag) Bendamustine formulation in 2016 rather than launch its ready-to-dilute (500 mL bag) formulation in late 2015. Management would need to have a high degree of conviction around hospital demand and pricing power for this product (that would be similar to Teva’s liquid bendamustine, which we expect to be on the market by that time) to launch its first generation product prior to the resolution of Teva’s second lawsuit. We think the rapid dose formulation would be commercially differentiated and better received.” 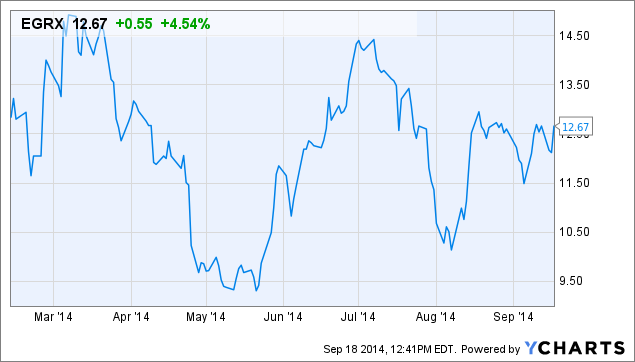