In a research note published yesterday, Canaccord Genuity analyst Laura Champine Maintained a Hold rating on Family Dollar Stores (FDO) with a price target of $49 as the company’s EPS missed expectations for a third straight quarter.

Champine noted, “The gross margin came in 10bps below our estimate, and the EPS miss would have been worse if not for a lower tax rate which added $0.04 of upside. We are maintaining our neutral stance as the core low-income customer remains pressured, and FDO is still in the very early stages of its strategic overhaul”.

On a more positive note, Champine wrote, “FDO’s plans suggest penetration of lower-margin consumables will continue to increase in FY15. This includes expanded coolers and the rollout of alcohol in stores. Consumables penetration has increased 130bps over the trailing 12-month period, and the category now accounts for 73.3% of total sales. We expect sustained consumables gains will continue to pressure gross margins”.

According to TipRanks.com, which measures analysts and bloggers success rate based on how their calls perform, analyst Laura Champine currently has a one-year average return of 5.7% and a 48% success rate. Champine is ranked #889 out of 3211 analysts. 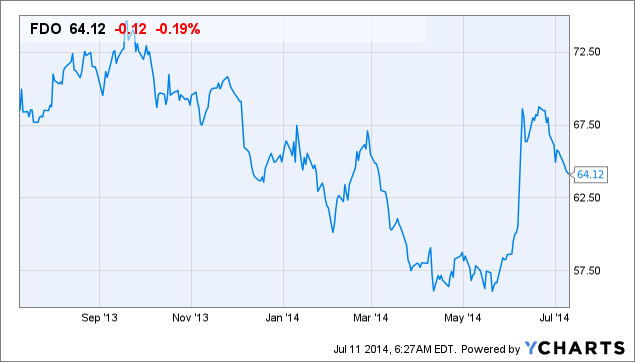 Looking Ahead of Wall Street: Micron Technology, Bed Bath and Beyond, Family Dollar