Analysts are weighing in on Canadian Solar Inc. (NASDAQ:CSIQ), after the company hosted its Investor Day in New York to discuss its business strategy and outlook.

Canaccord Genuity analyst Jed Dorsheimer came away from the company’s investor day with little change to his larger understanding of the company and its transition to a build-to-sell model.

Dorsheimer wrote, “We continue to believe that the core module business will experience tightening supply/ demand during this bullish North American adoption cycle, which should benefit CSIQ’s core manufacturing business. On the project side, we believe a YieldCo will provide upside as hand-picked, high quality assets can be dropped down to realize greater longterm return. Further, we maintain our belief that there is a market premium for DevCos with parallel YieldCo vehicles.”

The analyst rates Canadian Solar Inc. shares a Buy with a price target of $45, which implies an upside of 29% from current levels.

Roth Capital analyst Philip Shen sounds more thrilled following Investor Day, stating, “We liked what we heard regarding the company’s module cost structure roadmap, its technology, and direct sales/solutions gross margin expansion strategy. Moreover, CSIQ is, in our view, one of the few solar companies that we believe can pull off a yieldco, thereby creating a sustainable competitive advantage. That said, macro trends notwithstanding, we could see the stock trading sideways over the immediate near-term as details on the yieldco were somewhat light. We would expect upside to the stock to be driven by more yieldco details and after the need for a potential financing is addressed (likely through debt).”

The analyst concluded, “While the market was looking for a bit more in terms of yieldco details and investors may have been spooked by the potential need for capital to serve as a buffer during its yieldco transition, we think it’s just near-term noise as CSIQ is positioned for high quality CAFD from high quality projects and we would expect management to pursue non-equity options. Fundamentally, CSIQ is one of the best positioned solar companies, in our view.”

As a result, the analyst has increased the price target to $46 from $40, while maintaining a Buy rating on the stock. 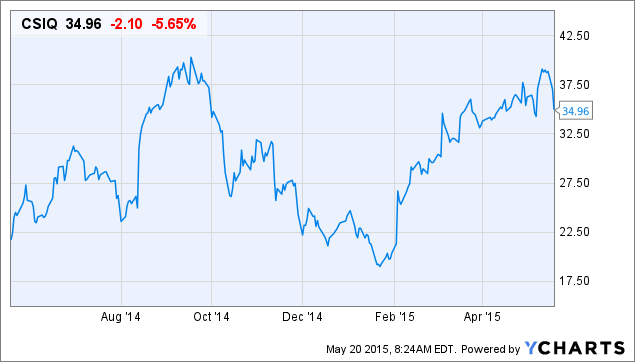