In a research report issued Wednesday, Canaccord analyst Mark Massaro reiterated a Buy rating on shares of Exact Sciences Corporation (NASDAQ:EXAS), while reducing the price target to $13 (from $26), following the news that the USPSTF didn’t include the company’s Cologuard on a draft list of recommended colon cancer screening tests in the U.S.

Massaro noted, “After digesting the Task’s Force surprising recent draft recommendation, it’s clearer to us that the “alternative test” classification in USPSTF’s draft statement is a big setback as we expect it’s very likely to NOT mandate commercial payors to adopt Cologuard given the parameters of the Affordable Care Act (ACA).”

“Should the draft recommendation hold as is AND with the interpretation that an “alternative test” does NOT mandate commercial payors to cover Cologuard, we think the ultimate bear case could take the stock as low as its $4.00/share net cash position. We expect the stock to hover around $10 until the time the TF makes the draft recommendation final (around Q1 or Q2/16),” the analyst continued.

Out of the 12 analysts polled by TipRanks, 5 rate Exact Sciences stock a Buy, 6 rate the stock a Hold and 1 recommends a Sell. With a return potential of 80%, the stock’s consensus target price stands at $18. 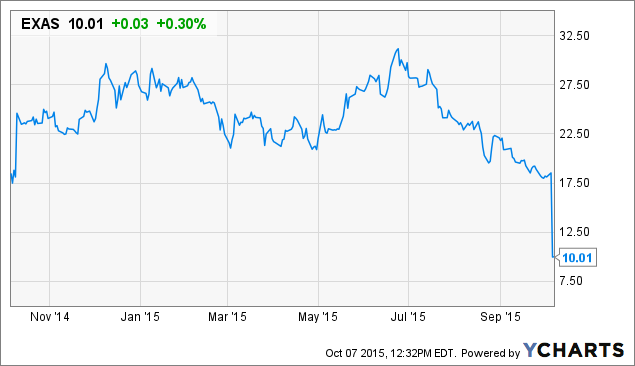