In a research report issued today, Canaccord Genuity analyst Matt Ramsay reiterated a Hold rating on Advanced Micro Devices, Inc. (NASDAQ:AMD) and reduced the price target to $2.00 (from $2.50), after the company reported earnings that missed expectations and offered a sales outlook that was well below Wall Street forecasts, sending shares plunging 14.5 percent. The new price target reflects a slight downside from where the stock is currently trading.

Ramsay wrote, “Despite a challenging macro environment, we believe AMD’s diversification strategy continues to show gradual progress and could position the company for more defensible long-term sales and even profitability should the cost basis be lowered further or new semi-custom deals produce higher margins. However, AMD has not been able to stem the decline of its Computing & Graphics business – now down roughly 40% Y/Y in 1H/15 – especially as the PC market has weakened to begin 2015.”

Furthermore, “While a recent restructuring to lower operating expenses by roughly 10% should help lower losses until sales recover during 2H/15, we believe further cost cuts will likely prove necessary and worry recent management departures and continued restructuring could prove disruptive given the need to innovate on a broad roadmap.”

Bottom line: “Despite believing in the leadership under AMD’s new CEO Lisa Su, we continue to wait for tangible signs of core business stability and hope for a more clear articulation of the strategy at the upcoming analyst day. Since we believe more cost cuts will likely be required and could be announced in the coming weeks, we maintain our HOLD rating despite our estimates moving sharply lower.” 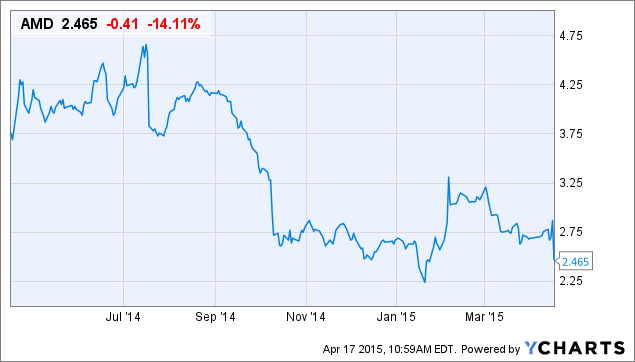