Canaccord Genuity analyst Scott Van Winkle came out today with his views on Sodastream International Ltd (NASDAQ:SODA), after the company released it’s fourth-quarter earnings results, posting revenue and adjusted EPS of $126.5 million and $0.29 versus Canaccord estimates of $122.4 million and $0.15, and consensus of $127.1 million and $0.18.

The analyst maintained a Hold rating on the stock and reduced the price target to $19 (from $22), which represents a potential upside of 10% from where the stock is currently trading.

Winkle noted, “The real incremental from the Q4 report is reduced distribution in the US, continued gross margin pressure on further discounting and promotion (partially offset by better mix) and more pronounced foreign currency headwinds. Foreign exchange is estimated to be a $60 million and $23 million headwind, respectively to revenue and operating income in 2015. Guidance continues to be withheld, although directional expectations were articulated. First half of 2015 is expected to exhibit YoY declines, while growth should be increasingly evident moving through H2/15. The net result is a “transition” year in 2015 that is going to be under pressure on each line of the P&L. We maintain our HOLD rating, but are lowering our target to $19, reflecting a significant negative revision to our earnings forecasts.”

According to TipRanks.com, which measures analysts’ and bloggers’ success rate based on how their calls perform, analyst Scott Van Winkle has a total average return of 15.2% and a 64.2% success rate. Winkle is ranked #160 out of 3483 analysts. 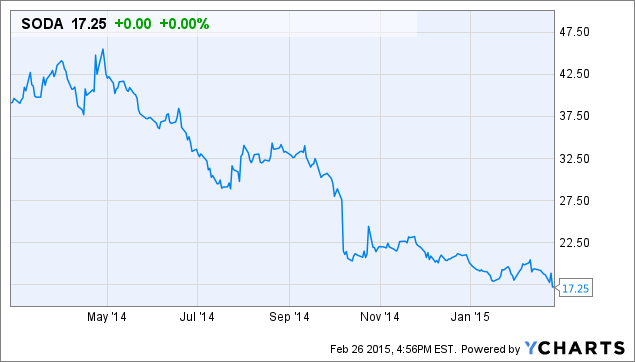 SodaStream: We Remain Cautious On The Shares, Says William Blair