Canaccord Genuity analyst John Newman came out today with some cautious stance on Agios Pharmaceuticals Inc (NASDAQ:AGIO), as the company will present data for AG-120 in solid tumors at the European Organisation for Research and Treatment of Cancer in Boston on November 5-9.

Newman noted, “We continue to expect only modest or negative data for AG-120 in solid tumors, which we believe holds downside for the stock, but we suspect investors now understand the level of risk here. The study is open-label, allowing AGIO to evaluate efficacy, and has been ongoing since March of 2014, but no data have been released.”

However, efficacy data for AG-348 in pyruvate kinase deficiency (PKD) is the core driver for the stock, according to the analyst, as AGIO owns 100% of the commercial rights. “We look for details on indications of efficacy, which might surface at ASH in December, and also updates on the aromatase safety signal. We believe increased hemoglobin levels are needs for AG-348 to show clear viability. Importantly, the current study focuses on transfusionindependent PKD patients, but may include those with low enough Hb levels to detect a signal.”, the analyst added.

Newman rates Agios Pharmaceuticals shares a Hold, with a price target of $93, which reflects a potential downside of nearly 6% from the current price of $98.65.

Out of the 8 analysts polled by TipRanks, 6 rate Agios Pharmaceuticals stock a Hold, while 2 rate the stock a Buy. With a return potential of 14.6%, the stock’s consensus target price stands at $113.80. 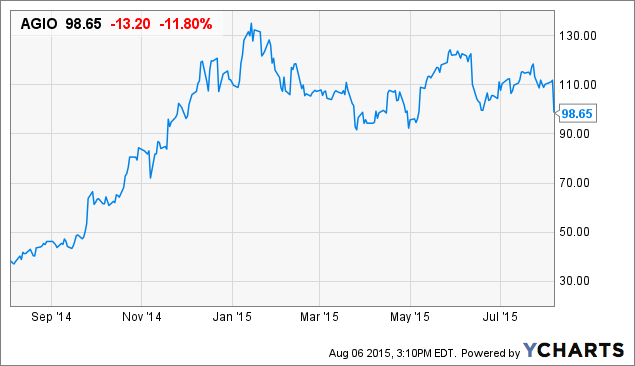