Canaccord Genuity analyst Gregory Miller reiterated a Hold rating on AT&T Inc (NYSE:T) with a price target of $34, following the company’s fourth-quarter results, posting a net loss that was slightly slimmer than Wall Street expected, as its mobile device deals attracted more customers, but its users switched to other networks at a higher rate.

Miller wrote, “Although the company’s wireless business demonstrated some level of resiliency amid rapidly increasing levels of competition from weaker competitors, overall phone net subscriber additions were negative, as largely expected and churn increased to the levels witnessed two years back at the time of the last significant iPhone launch. Although the wireline business demonstrated some long awaited improvement, it came largely on the sale of the CT business.”

Furthermore, “With our minor changes to our standalone AT&T estimates, we remind investors that the company has acquired one significant Mexican operator, is about to close on another and is expected to close on its long awaited proposed DirecTV merger by the end of the second quarter. Without any of the estimates fully baked into the forecast (or associated capital requirements) beyond the comment with earnings about no incremental EPS dilution from Mexico, we refrain from providing estimates that might appear as if they are conclusive. We believe the stock will be stuck in a holding pattern (as it has for the past four years) until greater clarity regarding 2015 and possibly 2016 can be provided.” 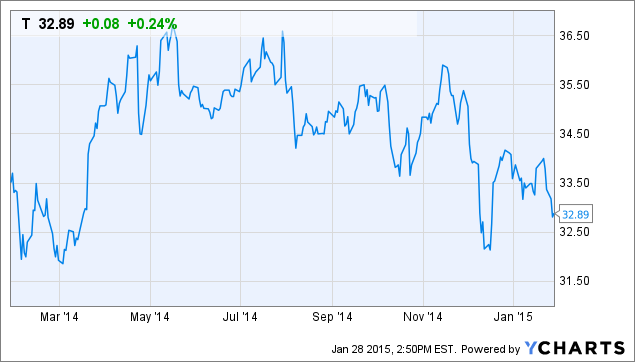