Valeant Pharmaceuticals Intl Inc (NYSE:VRX) received another set of praises today from analyst Neil Maruoka of Canaccord Genuity in a research report released today. The report comes after the company announced the acquisition of Salix Pharmaceuticals, Ltd. (NASDAQ:SLXP) for $158 per share, or ~$10B in cash, with an closing in the second quarter. The analyst rates the stock a Buy.

Maruoka noted, “Salix has been in play for months and has been our top pick for over a year, so we are thrilled to see these incredible assets go to one of our other top picks. We have consistently written that Salix is an attractive takeout candidate given the robustness of its script trends, longevity of its lead assets, and strength of its pipeline with IBS-Xifaxan and Relistor in opioid-induced constipation. While some suitors (and investors) apparently got spooked in November with the inventory mismanagement, Valeant seized the opportunity and reached a deal >$10/share less than its peak price before the issue occurred.”

In addition, “The timing is largely anticipated as: 1) Salix’s stock has gained ~12% over the last 10 days in response to takeout chatter; 2) the retirement of Carolyn Logan as CEO, who did an incredible job building the company from virtually nothing to a GI powerhouse in less than a decade; and 3) minimal impact of the audit committee review results. Valeant will realize $500M in synergies by the end of 2015 from overhead and R&D, and will be >20% accretive in 2016.” 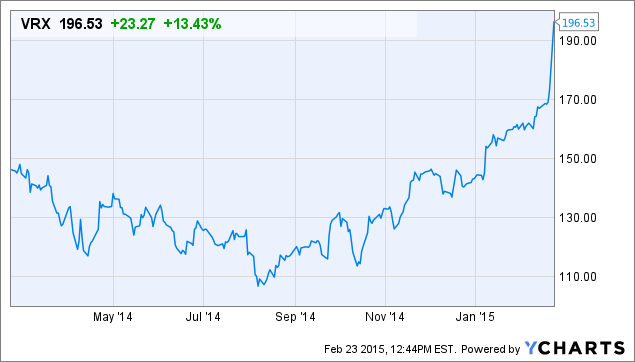