Rolland noted, “Like its competitor Intel, PC shipments were affected by lower desktop processor sales and an inventory drawdown in front of the Win10 launch in 3Q15. Also disappointing, the company has discontinued its SeaMicro unit and disclosed that its two new semicustom wins would ramp in the back half of 2016. Perhaps the only silver lining was that the company announced a new wafer supply agreement with Global Foundries, which was reduced to $1 billion in 2015 (from $1.1 billion in 2014), with no special payment triggers.”

Bottom line, “In our view, the company has wisely directed its strategic focus away from the core PC market and toward gaming APUs, microservers, and custom embedded processors, areas on which its larger competitor is less focused. However, we now believe much of this transition has already played out, with visibility into meaningful peak earnings elusive.”

The analyst reiterated a Perform rating on AMD with a price target of $3.50, which represents a potential upside of 38% from where the stock is currently trading. 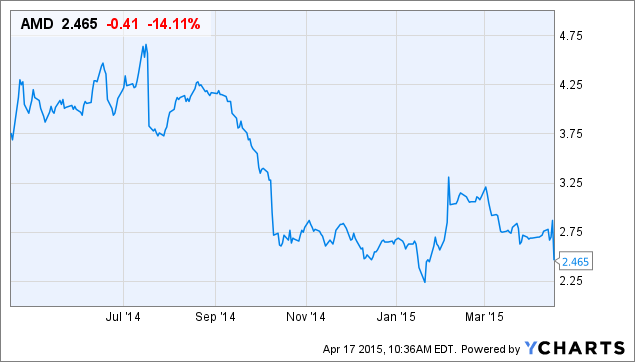