Ramsay commented: “After the meetings, we maintain our belief AMD’s diversification strategy remains on track and positions the company to drive steady long-term top-line growth and a return to sustained profitability. We also believe GPU share gain and semi-custom growth opportunities are underestimated, particularly after disappointing 2H/14 guidance for gaming console seasonality. However, an under-exposure to recent enterprise PC strength, Intel ramping focus on entry-level consumer sockets, and enthusiast GPU headwinds from the collapse of key crypto-currency exchanges remain challenges nearer term. Net-net, we are pleased with the progress, but turn-arounds take time.”

The analyst added, “AMD’s current strategy is to reduce PC market exposure from 90% in 2012 to 70% in 2013 to 60% in 2014 and to 50% exiting 2015. Investments focus on five key markets: professional graphics, semi-custom, dense server, embedded, and ultralow power clients – with the last four markets to be addressed with a combination of x86 and ARM processors as part of AMD’s ambidextrous computing strategy. We believe all of these markets will contribute solidly to operating margin expansion despite the potential to vary significantly in gross margin percentage. Our meetings this week with Mrs. Cotter focused primarily on the progress toward this strategy. AMD intends to recast its financials (we believe when the company reports Q3/14 results) to report both sales and operating margins segmented by Traditional and Growth markets, giving more insight into the x86 and GPU sales into PC-exposed versus emerging market opportunities and the solid operating margin profile of these growth verticals. On the next few pages, we briefly discuss each new growth business vector (in order of estimated nearterm contribution to revenue).” 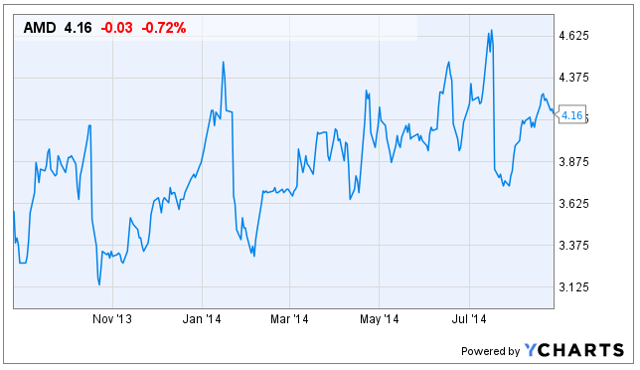