Canaccord Genuity analyst Matt Ramsay weighed in today with his views on Advanced Micro Devices, Inc. (NASDAQ:AMD), after the chip giant announced that revenue for the second quarter is expected to be lower than previously guided. The company now expects second quarter revenue to decrease approximately 8 percent sequentially, compared to the previous guidance of down 3 percent, plus or minus 3 percent.

Ramsay wrote, “Consistent with data points from our Computex meetings in June and from across the PC supply chain, AMD lowered Q2/15 revenue guidance to (-8%) Q/Q versus (-3%) citing weakness in PC OEM sales. While we believe AMD’s diversification strategy continues to show gradual progress and a refreshed roadmap could position the company for more defensible long-term sales, AMD has not been able to stem the decline of its Computing & Graphics business – now down over 40% Y/Y in 1H/15 – especially as the PC market has weakened following a stronger 2014.”

Furthermore, “While another recent restructuring and the SeaMicro business exit should lower operating expenses enough to stem cash burn with new products launching and an improved PC channel during 2H/15, we worry PC headwinds will persist through 2016 and AMD’s most important new products will likely not ramp fully for another 18 months. Despite believing in the leadership under AMD’s new CEO Lisa Su, we continue to wait for tangible signs of core business stability or new product inflection before becoming more constructive on shares.”

The analyst reiterated a Hold rating on AMD with a price target of $2.25, which reflects a potential downside of 9% from last closing price. 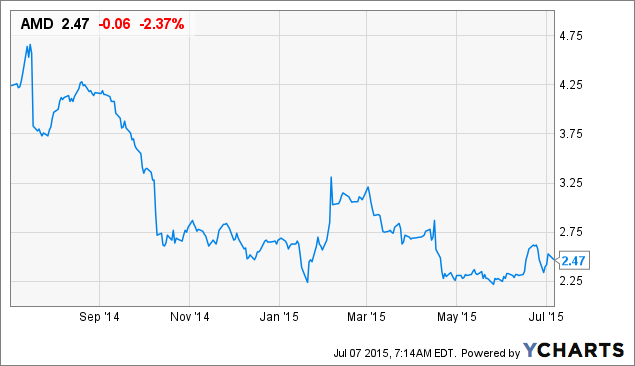